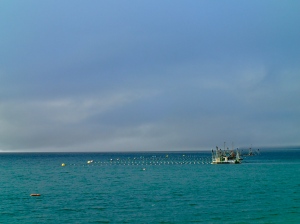 The kids and I spent a few days up on Lummi Island this week, checking out what is quite possibly the most responsible, environmentally friendly commercial fishing enterprise in the world. The Lummi Island reef netters employ an ancient technique, where a net is suspended between two anchored boats; when the target species enters, the net is raised to capture them. The way it’s done on Lummi really sets the bar for low carbon footprint, zero by-catch and the highest quality fish.

First, the reef net boats–or “gears” as the whole array of lead lines, boats and nets is called–are anchored in place for the season. The main netting location is just a few hundred yards offshore, so the only energy used to fish is the tablespoon or so of gas it takes to get from the beach to the “gears” by skiff. When the crew arrives on the boats, the nets are lowered into place and fishing begins. The spotter climbs to the top of a tall platform, the headstand, and watches for fish entering the net. When he sees the right species and number of fish, he or she–30% of the Lummi Island crew is made up of women–shouts “TAKE ‘EM!” The net flies upward, powered by  a series of solar-powered winches, the captured fish are released into a live-well, and the net is re-deployed. It takes less than a minute and the boat is back fishing. 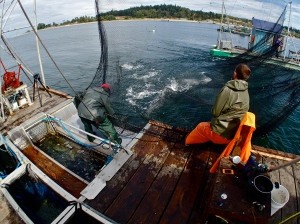 Hauling in the catch. Here you can see the captured salmon about to be transferred to the live-well. 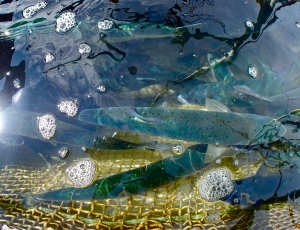 Pink salmon harvested from an abundant–and growing–population swim in the live-well.

Finally, the quality of fish caught by this method is unbelievable. The fish go directly from the net into a live-well with no handling, and stay there until the crew is ready to start processing. Each fish is lifted from the live-well by hand, and bled in another well. (The presence of blood in salmon flesh creates the majority of off flavors.) It then goes directly into an ice slurry, nearly untouched and completely free of blood. Unlike gill nets or seines, the other main commercial harvest techniques used in the area, reef-net fish are not bruised, caught by the gills, or abraded during any part of the process.

On a cultural level, we found none of the macho, us-against-nature mentality that sometimes develops in other commercial fishing fleets. To a man (or woman) everyone we met on the Lummi Island crew was exceptionally relaxed, welcoming and kind, with a clear sense of responsibility for the resource, and pride in what they were doing.

This is the future of commercial fishing. And I’m excited that Patagonia Provisions and the Wild Fish Conservancy, both of which I work with, are a part of the future that this fishery represents. 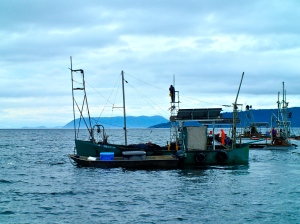 Closer shot of the reef net gears. The angled roofs on each boat are solar panels that run the winches.