Whenever possible, I like to include Skyla and Weston in some of the work I’m doing. It’s a way for us to share some cool experiences and give the kids a little bigger view of the world. Fortunately, the people I was working with on Lummi Island share that point of view. Birgit, who runs Patagonia Provisions, brought her family along, as did James, who’s the product manager. The kids wasted no time in becoming fast friends, and they quickly descended on the tide pools in front of the house we stayed in.

I also wanted the kids to learn more about commercial salmon fishing, so we went out to the reef-net “gears,” and spent an afternoon doing what we could to be helpful. That’s Josh, the reef-netter, teaching Weston how to catch and bleed fish from the live tank. Huge thanks to the kind and exceptionally kid-friendly crews aboard the reef-net boats. 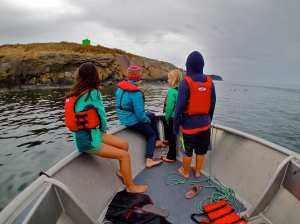 Later that day, I borrowed the Wild Fish Conservancy skiff to take the kids sport fishing. But the sudden appearance of harbor porpoises changed the objective. We followed them all the way across the channel, and ended up at a seal rookery, where dozens of mother and baby seals were hauled out on the rocks.

On another day, Keith and Riley, from the Lummi Island Wild salmon co-op, took us on their new tender to pick up fish from the outlying reef nets. The trip also doubled as an awesome tour of all the San Juan Islands, and included a stop for ice cream at Roche Harbor. (The looks on all the yachtie’s faces when a huge work boat pulled in amongst the fancy pleasure craft and released a pack of barefoot kids into their midst was priceless.) That’s Weston, Skyla, Claire and Gracie holding down the fish bins aboard the Galactic Ice.

But every time we came back to shore, the kids went immediately back to the tide pools. They built elaborate “habitats” in salad bowls and buckets to temporarily house the critters they found. While Birgit and James (from Provisions), Kurt and Nick (from Wild Fish Conservancy) and Riley and Keith (from Lummi Island Wild) and I discussed how this union of a commercial interest, a fish conservation NGO and fishermen can help save salmon, and Darcy (filmmaker) shot b-roll for her video of the reef netters, the kids absorbed themselves in sea life. When I went to check on them, I heard Skyla and Gracie shouting, “We have to improve the habitat! We have to improve the habitat!” A fitting sentiment, I thought, for the meeting going on inside.