When we aren’t harvesting food, it’s easy to forget about all the incredible life that inhabits the nearshore waters of Puget Sound. Our friend Aidan came to visit from Montana, and the kids wasted no time in getting down to the beach. We don’t generally harvest any shellfish in the summer, so this was purely an exercise in catch-and-release. In spite of the weather–it came down in buckets with thunder and lightning shortly after we retreated–Skyla, Weston and Aidan spent hours looking beneath rocks, digging holes, and generally grubbing around in the mud. I’m always amazed at how even island kids, who live every day surrounded by water and beach, never seem to tire of these activities.

But sometimes, it takes a visitor from the mountains to motivate us toward something we take for granted. The kids found horse clams, steamers, cockles, mud shrimp, rock pricklebacks (small, eel-like fish that live under rocks), sculpins, shore crabs, kelp crabs, rock crabs, a small Dungeness, pile worms, and a few critters we couldn’t identify. Each new find was celebrated, observed, and gently released. And then, with weather sweeping in, we headed home to eat sandwiches instead of seafood. A great day in my book. Thanks, Aidan, for reminding us to look more closely at where we live. 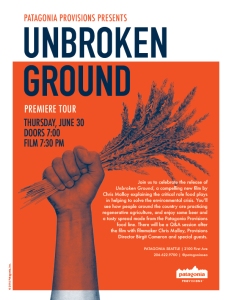 For the last seven years, I have been fortunate to work with Patagonia on a very cool project, which is now known as Patagonia Provisions. It’s a food company whose reason for existence is to make delicious food that’s good for people and the planet. Along the way, I’ve met some of the most inspiring people around–people who are growing, raising, catching and making food in ways that can help solve the current environmental crisis. The passion and knowledge these people bring to the food world is mind blowing.

This movie, made by my friend Chris Malloy, introduces these people and shows what they’re doing. Which to me, is really amazing stuff–reef netting for salmon off Lummi Island, raising free-roaming buffalo in South Dakota, pioneering new crops and ways to grow and use them in Kansas and the Skagit Valley. And now, you can see the film this coming Thursday, June 30th, 7:00pm at the Seattle Patagonia store. Come on out if you can make it–we’ll have good food, beer, and conversation with Chris and some of the people featured in the film.

What a perfect day. Skyla made a special Father’s Day breakfast, then we piled into the car and headed west to explore the upper stretches of some streams that come down the east side of the Olympics. Drove to the end of a steep dirt road and ate sandwiches on the tailgate. Wadered up, tied on dry flies, and and jumped into the river. Skyla, ever intent on her fishing, spent hours in deep concentration.

Weston, as usual, was stoked just to be in waders and walking in the water. When he found a comfy rock, he kicked back and happily watched the river roll by. From time to time, he’d take the rod and make a few casts, but I think he mostly just likes being on–and more specifically, in–the water.

Fishing was slow. But, it hardly mattered. In contrast to my normal manic quest for fish, this was mostly just a day to spend in a gorgeous place, wading new water, hanging out together. On the way home, Weston slept (of course) and Skyla and I chatted and sang along with the stereo. The evening light was beautiful. A very happy Father’s Day indeed. I wouldn’t trade it for the world.

You hear it all the time: I can’t believe how fast my kids are growing up. But there’s a reason you hear it so frequently–it’s true. At one time or another, every parent on the planet thinks it. And now, on the last day of of the school year, as we suddenly say goodbye to 6th and 3rd grades, I’m feeling it more than ever. Especially when I look at pictures like this one, taken on a razor clamming adventure to the coast, back when the kids were small. I’m reminded yet again, how fast time goes by. Happy summer, everyone! Savor every moment.

Gerald Amos, if you don’t know him, is a powerful conservationist, First Nations leader, water man, family man and former All-Native star point guard. He’s also a great friend and one of the smartest, kindest people I know, quick to lend a hand or ear, share his hard-earned wisdom and lift spirits with his own. Gerald has had such in impact on my life, I had to take my kids up to Northern BC to spend some time with him a couple summers ago. What an experience we had! That’s Gerald with Weston above, and Skyla below. Not surprisingly, my kids love him.

For the last month, Gerald has been in the hospital, fighting for his life. Each day, he improves a little bit, his spirit too strong to give in, but he still has a long road ahead to full recovery. So I wanted to share how his work and his life affects people. Time with Gerald always inspires me to be a better person, a better father, a better friend, and to work harder to save the places we love. In the picture below, taken yesterday, Skyla is showing off her 6th grade class project, which focuses on stopping oil pipelines, something Gerald has been working on for years. The Gerald Effect, full-steam ahead, spreading around the world and through generations, just waiting for him to get back on his feet.