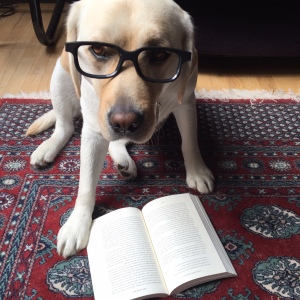 According to Halo, there’s nothing like spending a cool autumn day curled up with a good book–in this case, David James Duncan’s The River Why, which she’s re-reading for the first time in years. Halo reports she’s amazed at all the philosophical digressions and religious imagery, which she did not recall from the first time she read it. But then, that was back when she was just a pup, so it makes sense that all she remembers is the fishing and the main narrative of Gus and Eddy meeting and falling in love. Now that she’s all grown up, the deeper layers carry heavier meaning. In summary, though, Halo believes that all of Gus’s existential angst could have been relieved if only he’d had a Labrador retriever to keep him company.

As one of the last great salmon strongholds on the West Coast, and the greatest road-accessible steelhead fishery on the planet, the Skeena’s value is beyond measure. The good people at SkeenaWild are battling tooth and nail to save it, currently from the threat of Petronas’ LNG plant slated for Lelu Island and Flora Bank, which are the prime salmon/steelhead rearing habitat in the Skeena estuary.

You can help with contributions to SkeenaWild, and, if you happen to be in Skeena Country this coming Saturday, it’s easy to contribute in person: Come to the annual SkeenaWild fundraiser in Telkwa, bid on cool gear, buy a sweet SkeenaWild hoodie or hat, raise a glass, eat some food and have some fun.

I will be there to give a little talk, fellow Patagonia Ambassador April Vokey will MC, and we’ll feature a surprise appearance and a few words from someone you will definitely want to meet. I think it’s going to be an awesome time. 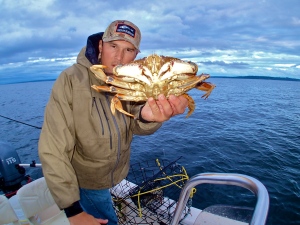 One of the highlights of this summer–there were many–was our good friend Smarty being back on the Island for extended visits. Since work took him to the East Coast, we’ve missed him. This summer we were able to hang out on a little more regular basis, and the kids enjoyed it as much as I did. We fished the Sound and Willapa Bay, had some epic evenings chasing silvers on surface flies back in a little local harbor (it was like an East Coast mini-blitz, with bait flying, salmon crashing the surface and our flies) and filled our pots with Dungeness crabs.

Just as important, there were drop-by doggie playdates on the beach, a couple of big Tuesday night wild-food dinners, chewing the fat about fishing gear and smoked salmon recipes, and more than a few gluttonous sushi feeds. Hopefully enough to entice him to move back where he belongs. Hey Smarty–time to get back home, bud! 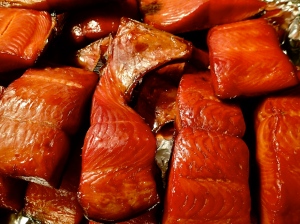 Even though fishing wasn’t exactly red hot on the Willapa, gradually, over the course of eight tides, we accumulated a pretty decent box of fish. And all of it had to be processed right away. In other words, I spent the better part of last week cutting, brining, smoking and packaging about sixty pounds of fish. First up was two full smoker loads of king salmon, brined with our usual 2/3 cup kosher salt and 1-1/2 cups dark brown sugar per nine cups of water, and plenty of alder smoke. The results, above.

For the silvers, I made “coho candy” with smaller strips of fish, more sugar in the brine, a brown-sugar glaze, some cracked black pepper, and apple-wood smoke. The idea here is convenient, easy-to-eat finger food for snacks or a little protein with breakfast.

Of course, there were also eggs. Big, prime, fall king eggs that burst in your mouth with fatty goodness. I screened out about a gallon of eggs and cured them with just a little soy sauce, rice wine and kosher salt. That’s the salmon eggs after screening and rinsing, just before seasoning. After a few days to cure in the fridge, the ikura (salmon caviar) went into a dozen small canning jars to be frozen for many great meals and snacks in the future. Over rice, on crackers, or simply by the spoonful, this stuff is unbelievable.

Finally, and with a sense of relief and satisfaction, Skyla and I made a kind of production line with the vac-sealer. This is what kids’ favorite school lunches look like just before going into the freezer, although I also admit that a sizeable portion has already disappeared. We’ve been eating smoked salmon at least once a day now for a week straight. I’m still not tired of it. Tired, for sure, but not tired of smoked salmon. In fact, I’m going to eat another chunk right now. 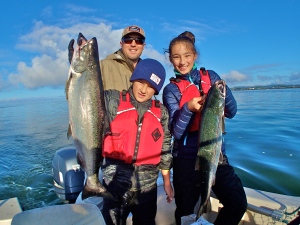 Well, it turned into a party. After a few hours at home to catch up on work, reload the bait box, unload some fish and generally hop around like a lunatic, Weston, Halo and I jumped in the car and picked up Skyla at volleyball practice. This meant hitting the road at 5:15pm on the Friday of a three-day weekend…which only a crazy person would do. But sometimes, apparently, craziness is rewarded: No traffic! None. Weston and Halo slept, Skyla played DJ, and we chatted and sang our way to the coast. We eventually had all five Sweeneys–including Grandma Janet–and their dog Fisher, Smarty and his dog Honey (Halo’s cousin), me, the kids and Halo at the cabin. People party, dog party, fishing party. Awesome.

Morning came fast. The kids and I jumped in with Smarty and four Sweeney’s took their boat in search of salmon. As an added bonus, we were joining the circus that is the annual Willapa Bay Salmon Derby, so nobody was getting lonely on the water. Pictured at top: the kids and Smarty with Weston’s king (which he couldn’t lift on his own) and Skyla’s silver. Just above, the Sweeneys with a nice silver.

Of course, Weston–the kid who sleeps most of the time while fishing and still manages to land the biggest trout in Montana and the 30-pound halibut on a steelhead rod in BC–won the kids’ division of the derby, earning him hearty applause from the crowd, $50 cash, and bragging rights. He was stoked! That’s him with Skyla and Sweeney, weighing in his fish. 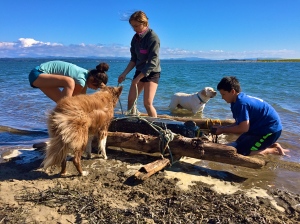 Fishing remained tough, but we hit the water again for the afternoon tide, and again the next morning just scratching out a fish here and there. By Sunday afternoon, we were fished out. Smarty headed down the coast to scout geese with Honey, and the rest of us kicked back on the beach, which turned into an impromptu raft-building party. That’s the crew with all hands (and paws) on deck. What a time! Huge thanks to the Sweeneys and Smarty for being family to us, and for making such great memories. And on that note, it’s time to go pull the last load of fish out of the smoker now…Love this time of year.