Attention fellow Bainbridgers, Seattleites and Puget Sounders: My good friend, the novelist John Larison, is reading from his new book, Whiskey When We’re Dry, at Elliott Bay Books this Thursday, 7:00pm. This is a rare chance to meet and hear a writer on the brink of superstardom with a book that’s destined for The Big Time. As in big time publisher, big time movie rights already sold, big time–and well deserved–accolades pouring in from the critics.

I was lucky enough to read an early draft of Whiskey When We’re Dry, and I can tell you the story of a teenage girl gunfighter leaps off the pages. One reviewer called it incandescent, and I think that’s about as good a description as I could come up with. But I will try a few more specifics: It’s a literary Western with the luminous, lyrical prose of Cormac McCarthy but without the apocalyptic undertones; a voice as real and singular as Charles Portis’ Mattie in True Grit; the gripping, epic storytelling of Larry McMurtry’s Lonesome Dove. All in one book that’s as true to it’s 19th Century setting as it is relevant to our current world.

As a writer, I’m swallowing my jealousy of Larison’s talent to be there tomorrow night. As a reader, I’m stoked to hear the words from the man who put them together so beautifully. And as friend, well, I’m just looking forward to a bit of hang time with a good buddy. Meet you there! 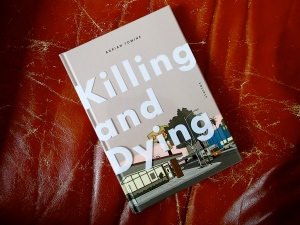 After being completely blown away by this book, I was going to post a glowing review. But I figured people would notice the name of the author, connect the dots, and discount what I had to say on the basis of nepotism.

Then I was simply going to write about how proud I am of my brother, or for that matter, how proud I am to even be related to an artist of this genius. But I thought that being “proud of” someone might be read as patronizing, as if I had something to do with the achievement.

So I will just say this: Killing And Dying is a masterpiece of storytelling. I am not usually a fan of “graphic novels,” but this clearly supersedes the genre. These are stories of incredible depth and layered meanings, where the spare dialog rings true and the gorgeous, deceptively simple drawings capture emotions and thoughts unattainable through words alone. The result is a kind of storytelling that I have not experienced in any other medium, whether it be comics, prose literature, or film.

But don’t just take my word for it. The great AO Scott, Chief Film Critic at The New York Times, said it all better than I ever could. And as far as I know, he is not related to my brother. Click HERE for the review.

So, yes as a reader, I found this book to be a deep and affecting experience. As Adrian’s brother, I am incredibly proud of what he’s created. And as a writer, it’s both daunting and inspiring. Check it out. I think you’ll find it more than worthy of your time.

Closer To The Ground Video

As part of the re-launch for the second edition, Patagonia Books commissioned this little “book trailer.” I’m not really sure what that means or how it works, but I think the idea is that the video helps sell books. In which case, as weird as it is seeing and hearing myself onscreen, I’m all for it. And the kids and I had a fun time with the shoot.

Huge thanks to the good folks at Vignette Creative for doing such a beautiful job.

I will probably post this again when we’re closer to the release date of the paperback, but thought I’d put up an early peek now. Hope you like it.

Closer to the Ground: Second Edition

Here’s a sneak peak at the new cover of the Closer to the Ground paperback version. The second edition will available in September, and features photos and recipes. I think it’s going to be pretty sweet. Hope you like it.

Just a quick note that the kids and I will be working as honorary booksellers at Eagle Harbor Books this Saturday, November 29th. Our shift is from noon to 1:00pm. This is part of the Indies First promotion to encourage support of local, independent bookstores. (What, exactly, my presence there will do to encourage support remains to be seen.) But it’s a fun event, and fortunately, there will be lots of other writers–David Guterson, Jonathan Evison, Lance Weller among them–throughout the day as well.

I will be there pushing Closer to the Ground…er, I mean…suggesting good books from other authors for holiday gift giving, and will be happy to sign or inscribe books as well. Even the ones I didn’t write. Did I mention what a great gift Closer to the Ground makes? Skyla and Weston will be on hand to consult with parents or grandparents about books their kids or grandkids would enjoy.

Come on by, shop for gifts, buy something for yourself, or just say hi.