Finally found the time to deal with the tree that took out our power and internet a couple weeks ago, which meant, time to put the kids to work. Of course, it had to be hemlock (crazy heavy when wet, not many BTUs when dry), but we’ll take it. And considering it was right in our front yard, which alleviates all the driving, loading and unloading we usually go through to gather firewood, not a bad score. That’s me with the 036 sliding through the small end of the tree like butter. Love that saw. 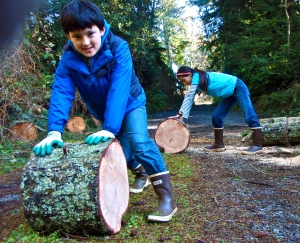 Is this how man invented–or discovered–the wheel? As noted above, green hemlock weighs a ton, so the easiest way to get it back to the wood storage area was to roll it. Perfect job for the shorter people in the family, as I’m a little too tall–or old, more likely–to get down and push these rounds. Good efficiency: the kids rolled ’em as I cut, so we finished up pretty quickly.

Okay, nobody call Child Protective Services…it’s not running, and Weston didn’t do any cutting. He was just hamming it up with my gear when the job was done. That old 36 is so heavy, he could barely lift it, anyway. Merry Christmas, everyone. 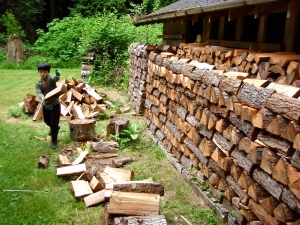 Next winter’s firewood should have been split and stacked for drying months ago, but life–work, kid sports, book stuff, fishing–got in the way. And now I’m feeling pressure to get the three huge firs I hauled home (with the help of good buddies Neal and Reed) back in April into position to dry fast. The good news is the trees have been cut and quartered since April. The bad news is that they don’t dry that well when they’re lying on the ground in a huge pile.

Thankfully, I have a little help. Weston does quite a bit, actually, and probably cuts a third of the time out of my usual solo stacking process. More importantly, his cheerful spirits make the work more fun. And if we stack for extra good air circulation, and have a relatively warm, dry summer, we might be okay. Last year I had a late start as well, and the wood burned okay. Still a little wetter than ideal, but good enough. That’s probably the best we can hope for this year.

So yeah, a little late once again. But then, if I’m being honest with myself, it’s been several years since I actually had all the wood put up when I like. Turns out, the dream of being done with the next year’s wood stacks a year in advance is really just that…a dream. In which case, I’m not behind schedule at all. In fact, I’m right on time. Awesome.

My good buddy Neal is pretty serious about his gym workouts, but there’s nothing like wrestling 350-pound fir rounds into position for splitting into “manageable” sized chunks. Even with the help of modern hydraulics. And especially when you have to follow that with loading, hauling and unloading the results. This is Neal deep into my exclusive FirewoodFit Workout Program. Ladies, he didn’t get those guns just from kettle bells and burpees.

Funny thing is, I showed up at the work site with my maul, sledge and wedges thinking I’d bust up the rounds by myself and start hauling it all back home. The trees were described as “pretty big” by my friend, Dale, who took them down. But that turned out to be quite the understatement. Or I underestimated his assessment powers, which is somewhat predictable, considering the last time someone called about a “decent-sized tree” down across their driveway, it turned out to be a three-inch sapling which I dragged into the bushes with one hand.

These were three enormous, old second-growth firs, with dense, tight-grained wood from growing in deep shade. No knots, either. Another result of the shade. Perfect. And better yet, I could drive right up to the pile of logs. Awesome. But  there was no way I could lift the rounds, and no way I could split ’em up with hand tools. So I ran up the hill, grabbed the hydraulics and went to work. When Neal showed up–reinforcements!–I was already beat. But with his help, we got through about half the pile. Next session to come after a four day recovery period. I am now accepting applications and deposits from the select few elite athletes who might qualify for this workout program. Might even offer a discount for this Friday’s class. Let me know if you want to sign up.

Icy north wind blowing tonight, supposed to drop down to the low 20s, and here I am pounding on the keyboard in my unheated office. Full puff gear, sherpa hat, fingerless gloves (almost as good for typing as they are for fishing) in effect. Still have to keep stopping to warm my hands in pockets or blow into ’em like I’m throwing dice.

In the house, though, it’s toasty. Of course, I’m already concerned about the rate at which we’re tearing through the woodpile, but it sure feels good. Nothing like a good wood stove.

It’s That Time Of Year 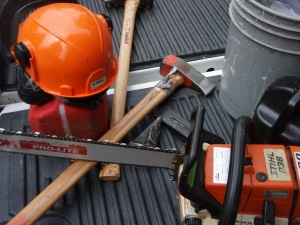 The wind blows, trees fall, and I have to be ready to run out and procure next winter’s wood supply. And I’m still working at hauling away the rounds I left in our neighbor’s yard, too. Thankfully, they’re patient people. Slow going, but we’re getting there. Only four more cords and we should be good…

Of course, I also have to make space. So most mornings before work, I try to split a few rounds, and when the pile of split wood gets big enough, I spend a few sessions stacking. Good to get the blood pumping before work, since my unheated office is starting to get pretty chilly. Busting a few rounds staves off the fingers-too-stiff-to-type condition for at least an extra hour. Yet another way firewood keeps you warm.