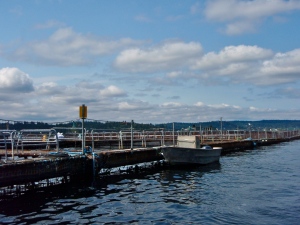 I believe that most of us in the community where we live are aware of the well-documented harm open-water salmon farms cause. We know salmon farms are the source of vast quantities of waste pollution, disease outbreaks, and parasites that all impact the marine environment and sea life passing by the net pens. We know large amounts of chemicals and antibiotics are required to keep the fish alive in such close quarters.

We know the flesh of farmed salmon would be gray if not for coloring added to their food, and disdain the bland taste and soft texture, not to mention the potential exposure to antibiotics and chemicals the fish are treated with. So it’s easy to boycott farmed salmon, and many of us do.

But what many of us don’t know is that there’s a large salmon farming facility right here in our own backyard. More specifically–and ironically–the American Gold Seafoods net pens are anchored directly within the Orchard Rocks Conservation Area. This is a place set aside by the state and made off limits to fishing and other harvest for the sole purpose of conserving a special habitat and the sea life that inhabits it.

It’s tough to understand how it’s even possible to combine a “Conservation” Area with an open-water salmon farm. The two are 180-degrees apart in purpose and execution. Instead of conserving anything, we have a commercial, for-profit salmon feedlot, and all its associated environmental problems, right in the middle of what should be considered a shared, public treasure. Sad.

In 2012, this fish farm was the site of the first recorded outbreak of IHN, an infectious, deadly (to fish) disease, in Washington waters. The result was that American Gold had to euthanize and remove their entire stock of salmon. According to the Washington Department of Fish and Wildlife, the appearance of the disease was “a big concern for us,” because “you don’t fully understand the impact to wild fish.” And yet, the net pens are still there, packed full of yet another batch of non-native Atlantic salmon.

The feedlot concept doesn’t work for salmon, not when public resources like wild fish and clean water are endangered for the profit of a few. On a larger scale, the disease outbreak, the low quality of the fish produced, the enormous amounts of chemicals, antibiotics and fecal waste released into our shared waters, are all just further proof: When humans try to do something better than Mother Nature, they are destined to failure.

How do you feel about a company polluting our waters, risking our wild fish, and fouling our conservation area, for their own profit?