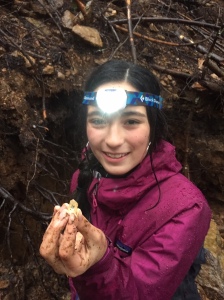 Tom McGuane once said he wishes he could just go outside and enjoy it, but that he needs a game to play. He was referring to fishing, but I think it applies to a lot of us in our outdoor pursuits. And “pursuits” is the key word here. For us, it’s fishing, clam digging, crabbing, oyster picking, the occasional bird hunt, and just about anything else we can “pursue.” And as we’ve recently learned, it doesn’t even need to be something edible. Our friend Danielle took us crystal hunting, and we had a ton of fun grubbing around in the dirt.

And we actually found a bunch. 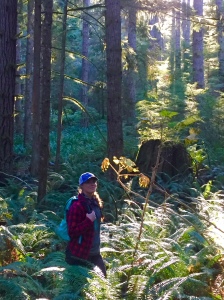 Then, we took her mushroom hunting, which was so absorbing, we ended up completely lost in the woods. A bit more of an adventure than we were planning, but we eventually found our way back to the car before nightfall.

And we actually found a bunch. 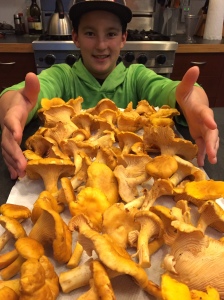 Like McGuane, I wish I could just go out there and soak it in, but the games are so much fun I wouldn’t ever give ’em up. They give us reason, the push, to go outside, to watch weather and tide, to search. I realize now that what we find is happiness. Now, if only we could eat those crystals… 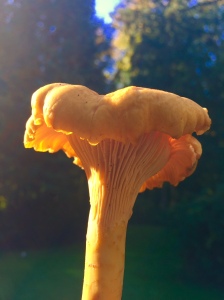 Chanterelles come in all kinds of shapes and sizes; some are 1/2 inch across the cap, while others are six inches; some are shaped like buttons, others grow into wild free-form shapes you’d expect to see on a coral reef. Every once in a while you find one so perfect and classic in shape, you have to snap a picture.

But they’re all delicious, and looking for them is a fun, easy activity we can do in limited windows of time. Monday, after school, we had a brief bit of dry weather, no sports practices, and very little homework, so the kids and I made a quick run to one of our local, public places before dark. Halo says “Leash laws are so insulting! We don’t need no stinking leashes.”

Of course, Mondays are the worst days to pick on the Island. Everybody goes on the weekend and new chanterelles haven’t come up yet. There were trails and flattened vegetation all through the usually dense woods. The remaining, unharvested chanterelles were few and far between, but we managed to scrape up a few good ones–enough for a meal or two–in the deepest darkest spots, and had a good time busting brush and breathing the clean, rain-swept air.

Light In The Forest

One of the things I really love about picking chanterelles with the kids is the chance to just walk through the forest chatting about whatever comes up. It’s such a relaxed way to spend time together, without all the intensity that rises when we’re doing other activities, like fishing or team sports.

On the afternoon above, Skyla and I talked about everything from her new teacher at school to potential Halloween costumes. Nothing all that consequential, but nice.

I also really appreciate that picking mushrooms isn’t as gear-intensive as our other pursuits–nothing to prep, no gear to wash off afterward, not even any lunches to make. We just go when we’re ready, walk around as long as we want, and quit when we’re done.

Some would say, “just go hiking or walking in the woods,” but I don’t think I’m there yet. I still need to have some kind of goal, or purpose to our outings, and I think searching for mushrooms provides just enough of it. For both me and the kids. As Tom McGuane once said about fishing, “I have to have a game to play.”

And I haven’t even touched on the eating part: chanterelle pizza, pasta with cream sauce, sauteed chanterelles on polenta…

Or the beauty of walking slowly through the woods this time of year. Or how close to home we can pick chanterelles. Or…

Okay, so that’s more than one thing I love about chanterelles. But you get the point. 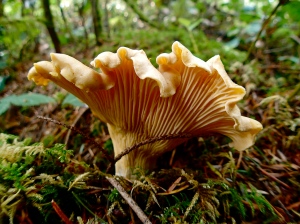 Not many yet, at least where we were, but the ones we found were prime. Seems like we’ve had more than enough rain for a true bonanza, but I’m wondering if it’s because the summer was so dry, the soil still needs another good soaking or two.

Or perhaps someone was picking ahead of us and all we saw were the ones they missed?

Hard to say, but few-and-far-between is okay…we just wanted enough for a meal, and a little walking between scores makes it all the more fun. Anyway, we ended up with a couple of pounds for a pretty casual hour’s walk in the woods. Perfect.

After what has been the longest, most beautiful summer in recent memory, it seems fall is actually here now. Scattered showers between long stretches of warm, bluesky days have given way to what looks to be a pretty steady stream of gray and wet. We cranked up the wood stove for the first time tonight, and it felt and smelled just like the season.

While slugs and mold spores are jubilant, there is good news for us humans, too: Chanterelles are popping up in prime condition now. These are not the dry, hard mushrooms of August rain showers, or the soggy, wet behemoths of November, but rather the perfect, firm specimens that make these mushrooms so popular with cooks and eaters alike.

But I think what I love most about wild mushrooms is the process of finding them. There’s nothing like getting out in the woods and walking around with friends and family–with a focus reminiscent of childhood Easter egg hunts. My good friend Neal and I had a great time picking the other day–just a short little run to nearby woods, but full of good talk and plenty of golden beauties. I stopped harvesting just long enough to snap this shot of one before it went into my bag. Next stop, atop a chanterelle pizza. Or in pasta. Or over creamy polenta…