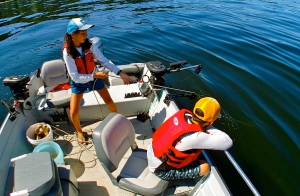 I admit, it took a few deep breaths–Serenity now! Serenity now!–to get over the whole hitting-the-tree-with-boat thing, but the kids and I ended up spending a gorgeous day on the water. Sunshine, light breeze and a bucket full of big Dungeness certainly helped.

It didn’t hurt that after months of toiling on the second edition of Closer to the Ground, it was finally off to the printer, either. Big load off my mind, and I think it’s going to look great.

Most important, though, was simply being on the water with the kids. We spent a lot of time just chatting about random things, eating sandwiches, strategizing about where to put our crab pots. Both kids worked on boat-driving skills (hopefully better than my trailer-driving skills) and I think we all had a great summer day. 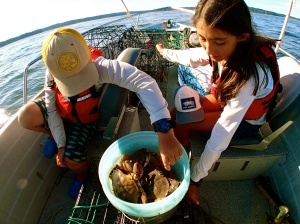 It’s tough to go anywhere with Yvon and not stop to grub up some wild food along the way. And since I’m pretty much in the same category, when you put the two of us together, we tend to find the time–even in the middle of a steelhead trip. The crab pots paid off with countless huge Dungeness, right in front of camp, and Yvon, as usual, ate all the crab innards with a spoon while Will and I stuck to the succulent leg and body meat. Then there were limpets dotting the rocks along the beach, which I thought of as tiny abalone. We also found tremendous steamer-clam beds, and even a lack of implements and containers couldn’t slow us down. That’s the human backhoe mining for bivalves with a mini-raft oar above, and hauling our catch in someone’s discarded wading boot below. Who needs shovels and buckets?

But crab guts and raw clams proved too tame for Yvon, and I learned some new tricks along the way. At low tide, near the mouth of one of the rivers we fished, we found the rocks covered in marine snails, or whelks. I was focused on the fishing at hand, and would have barely even noticed, if Yvon hadn’t started collecting all he could carry. Back at camp that night, he steamed ’em up, then used a special, improvised tool–hemostats and a #2 octopus hook–to pull the critters from their shells.

Then he tossed the de-shelled snails in garlic butter, and I have to admit, it smelled pretty good. But I was still skeptical. Until my first bite. Amazing. Like tender, delicate steamer clams, only milder and more complex, with just a hint of the sea.

Finally, as we were preparing to leave camp on the last day, Yvon started busting barnacles off the rocks, cutting away the shell and slurping ’em down. I would like to say they were tasty, or even good, but I will just leave it at this: Not really to my taste. Kind of like gooey-yet-chewy oysters with a little iodine twang thrown in for good measure. But perhaps I was just anxious to get going, as we were bailing early due to a near-catastrophic weather forecast and 35 miles of open water between us and town. To be continued… 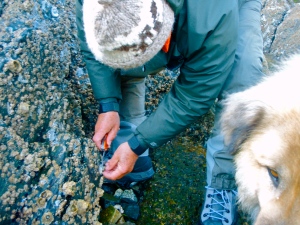 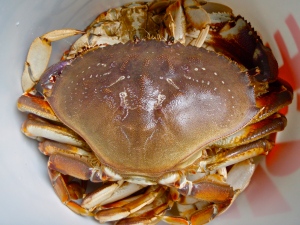 With no winter crab season this year (again), the summer opener came along with an even higher level of craving for me than usual. Of course, I ate too much too fast and am now, at least for the time being, crabbed out. But man, was it good while it lasted. (Thanks, Smarty!) And it appears we’re off to a season of abundance where Dungeness crab are concerned. Picture above is pre-cook, below is after 16 minutes of boiling in very salty water. Delicious. Crabbed out? Yes. But I doubt it’ll last. As I looked at these pix, I was surprised to find my mouth already starting to water. Perhaps my crab-out threshold has been raised.

Now That’s What I Call A Crab

We don’t see many this size in Puget Sound anymore, but this is an honest-to-goodness, actually measured, nine-inch Dungeness crab. After a tough day of fishing–wind, rain, the whole nine yards–with the kids and our good friend Smarty, we stopped to pull Smarty’s pots. Plenty of standard, just-legal 6 1/2 inchers and this grizzled old mossyback behemoth. It was delicious. Of course, after a couple days of gorging, I’m pretty much crabbed out for the season. But Stacy and Skyla are still going strong.

The old-timers say crabs like this  were the standard, back in the day. But now, with 300,000+ recreational crabbers plying the Sound, plus commercial and tribal fisheries, the big boys get weeded out pretty fast. It’s surprising, really, with that kind of pressure, that we have any crab to eat at all. On days when crabbing is open, a huge portion of the Sound looks like a slalom course of buoys.

But so far, the crab population seems to be holding its own, and we’ve had good catches for the last several years in a row. Just not many like this guy. I understand, though, that crab populations are cyclical, and I wonder how they’ll do with this much harvesting going on when their numbers trend downward naturally. Guess we’ll find out. In the mean time, we take just what we need and eat it with great appreciation.