Writers On The Fly Events

Check it out: Based on the fantastic response to Writers On The Fly events in Seattle, Jason Rolfe, the man behind WOTF, is taking the show on the road. And I’m lucky enough to be a part of two of the shows. In Portland, November 2nd (Patagonia Portland, 7:00pm), I will read with Cameron Scott, Cameron Chambers, Steve Duda and my great friend–and fellow Patagonia ambassador–Kate Taylor. In Seattle, November 3rd (Emerald Water Anglers, 7:00pm), with Langdon Cook, Steve Duda, Cameron Chambers and Michael Doherty.

The tour supports local conservation organizations and I think it’s going to be a ton of fun. Post-event antics to follow as well, I’m sure. Details on the poster above or on the web HERE.

Come on out, listen to some stories, drink beer and hang. Kind of like fish camp, only indoors. Sounds like a pretty awesome evening to me. 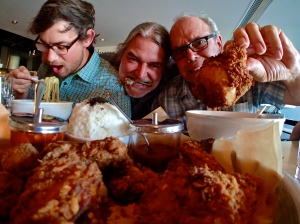 Something’s fishy in West Seattle: Freelance conservation advocate and webmeister, Paul Moinester; The Flyfish Journal Editor and occasional Santa impersonator, Steve Duda; and Patagonia rep and Wild Steelhead Coalition boardie, Brian Bennett digging  in and grubbin’ down. Just part of the crowd at an impromptu, pre-Writers-On-The-Fly feast at West Seattle’s famed Ma’Ono. Did I mention the fried chicken? Or the Spam musubi? Or the saimin noodles? Holy smokes.

Any visit to Emerald Water Anglers should include a meal at Ma’Ono. Hey, McCoy…how ’bout a package deal: Buy a rod, get fried chicken free? Sales through the roof. Aloha!

After all the book events and fish conservation talks, I’m really looking forward to a reading of pure fish stories. Nothing to sell, no politics, just some of my favorite tales I’ve written but never before read aloud. I think it’s going to be a lot of fun, and I’m honored to be joined by fellow fishing writers Kate Taylor and Alex Collier. Did I mention there’s going to be beer? Come on out, listen to  some fish stories and shoot the breeze.

Emerald Waters will also have copies of Closer to the Ground for sale, and of course, I will be more than happy to sign or inscribe. Wait, didn’t I just say I wasn’t selling anything?