Writers On The Fly: Portland

After two book tours and countless other talks and readings, I can say without reservation that Wednesday night was one of those times when it all comes together. Great crew of readers on top of their game, engaged audience, beautiful venue, fun people to hang with, and high spirits. And beer. It was an honor, and my good luck, to be a part of it.

From left, that’s Jason Rolfe (WOTF instigator and MC), Kate Taylor, Cameron Scott, me, Cameron Chambers, Copi Vojta (WOTF photo exhibit curator), and Steve Duda. Kate did a beautiful reading of her story, “The Road Goes On Forever”, Scott gave me goosebumps with “Scout Captions” and other poems from The Book of Cold Mountain, Chambers made us all laugh with a new story about getting lost and excerpts from his book Chasing Rumor, and Duda had us laughing and crying with his heartfelt story about cliff swallows and an ode to all the flies dangling from the dashboard of his truck.

I drove home exhausted, voiceless (literally) and, for the first time in quite a while, inspired to get back to work on my novel. A huge and heartfelt thank you to Rolfe for inviting me to read, to everyone who was there to make it a fantastic night, and to tour sponsors Patagonia and The Flyfish Journal. Note: The WOTF Cascadia Tour continues–without me–tonight in Bellingham and tomorrow in Vancouver, BC. Wish I could be there.

Writers On The Fly Events

Check it out: Based on the fantastic response to Writers On The Fly events in Seattle, Jason Rolfe, the man behind WOTF, is taking the show on the road. And I’m lucky enough to be a part of two of the shows. In Portland, November 2nd (Patagonia Portland, 7:00pm), I will read with Cameron Scott, Cameron Chambers, Steve Duda and my great friend–and fellow Patagonia ambassador–Kate Taylor. In Seattle, November 3rd (Emerald Water Anglers, 7:00pm), with Langdon Cook, Steve Duda, Cameron Chambers and Michael Doherty.

The tour supports local conservation organizations and I think it’s going to be a ton of fun. Post-event antics to follow as well, I’m sure. Details on the poster above or on the web HERE.

Come on out, listen to some stories, drink beer and hang. Kind of like fish camp, only indoors. Sounds like a pretty awesome evening to me. 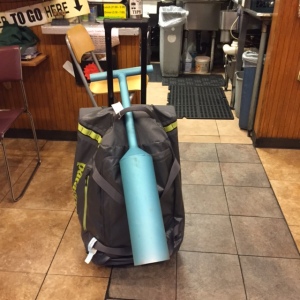 My good friend Kate Taylor was passing through Seattle, carrying 30 pounds of elk meat for me (a treasured gift, for sure), plus my clam gun, which she “borrowed” a couple months back. I didn’t want to drive onto the ferry for such a short trip, and had to figure out how to haul it all back home on foot. So I grabbed my trusty Black Hole Wheeled Duffel and ran for the boat.

We met under the viaduct for a vaguely sketchy exchange. Well, okay, I didn’t have anything to give her, so it wasn’t exactly an “exchange,” but meeting in a trash-strewn downtown alley to load black plastic garbage bags from her truck into my wheelie definitely felt shady. Then, in a completely unplanned bit of perfection, I discovered that the clam gun fit through the end grip and roller handle of the duffel, locking it in place for transport. Awesome. Quick hugs and I was on my way…with a brief stop for Thai food to go, which is where I took the picture. Hey, gotta make the most of any trip into the city…

On the ferry home, my luggage was the subject of several comments and questioning looks, but I was stoked, rolling along, to quote Bob Dylan, with one hand waving free. My guess is that whoever designed the bag never had 30 pounds of frozen elk steaks and a clam gun in mind, but the fit was so perfect, it sure seemed like it.

I posted the trailer for CHROME a few months back, and since then it’s been touring as part of the Fly Fish Film Tour. Now it’s here to watch in the comfort of wherever you happen to be. Anyway, it’s a cool project I was lucky enough to help out with, and at about 12 minutes, a pretty quick watch. Hope you like it. 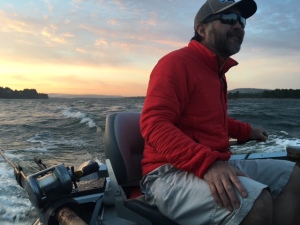 Here in the Pacific Northwest, the arrival of spring means different things for different people. For some, it’s the dusting of cedar and maple pollen that covers our cars. For others, it’s blooming tulips or the sound of tree frogs at night. But for me, spring isn’t really here until we’re on the Columbia River, chasing springers, and ideally, eating them. But first things first.

We spent a fantastic couple of days chasing springers on the Mighty Columbia last week. It was supposed to be three days, but the state closed the season a day early to keep us under the harvest quota. But we made the most of our time on the water. I was lucky to have a great crew of good friends on board–that’s Sweeney (on the left, trying to figure out how anyone–I won’t mention any names–could snarl a flasher so badly), Justin and Kate getting to work on the luxurious, expansive deck of the Lyla-Kai above. And more good friends–Smarty, Neal, John Wright–on the water around us. 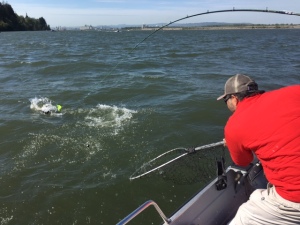 We also found some decent action, although we had to work for our fish. That’s another hatchery springer about to hit the net above.

Kate battled an 800 pound bull sea lion–that grabbed a fish she was fighting–for almost forty minutes. She cranked like hell, I tried to cork him off from breathing with the boat (so he’d let go of her fish), and Sweeney and Crump directed traffic. The whole circus act took us spinning all the way across the river and way downstream. Eventually, the sea lion released the fish, Kate reefed it to the boat, and we landed what was left. Not much to eat there.

Thankfully, we brought five whole ones to the boat in two afternoons of fishing, and I got to spend many hours with good friends in gorgeous weather. In shorts and flip-flops! In Washington in April! Man, that was fun. That’s Sweeney with a couple of nice ones above. I love spring. Stay tuned for the most important part of the whole springer experience–the eating. I love springers!  <first, third and sixth photos, courtesy of Kate Taylor> 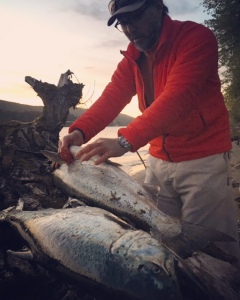