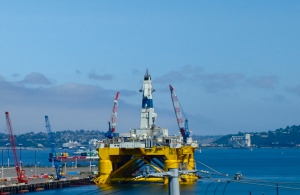 Shell’s Polar Pioneer preparing to leave the Port of Seattle, bound for the Chukchi Sea

Royal Dutch Shell–yes, the same company that was going to destroy the Sacred Headwaters of the Skeena and Nass Rivers with coalbed methane extraction–towed it’s arctic drilling rig, the Polar Pioneer, out of Seattle yesterday. Based on their performance with the Kulluk (ran aground under tow off Kodiak Island) and other drilling platforms (one caught fire in an Alaskan port), I won’t be surprised if some mechanical breakdown or lapse of judgement stops them en route to the arctic. We just have to hope it happens before the thing is connected to the seafloor and pumping oil.

A couple more thoughts: There has been some criticism of the “kayaktivism” that Seattlites have engaged in during the month that the Polar Pioneer was in port here. It’s been said that these protests do little to stop oil exploration in the arctic. Some have even stated that people in kayaks with signs surrounding the rig are wasting their time. I disagree.

We’ve seen a number of these on-the-water protests, and while they’ve done little to stop or slow preparations aboard the drilling rig, they draw plenty of media attention and inspire further activism. Last week, police had to use power tools to cut apart a group of grandmothers who chained themselves together to block supplies from reaching the docks. And the number of people in kayaks swelled. When you have a City Council member arrested in protest, as we did a few days ago, people notice. When local politicians, including our Mayor, are motivated to work political channels in an effort to keep Shell from doing their work here, word gets out. This is just the most visible side of the battle to stop arctic oil exploration, and it’s about citizens who don’t want their city to participate in that drilling.

I did have an interesting conversation with a young woman who was preparing to join the waterborne protest from here on the Island. I asked if her group was going to paddle all the way over to Seattle, and she said some would, but that a number were taking power boats. I wonder if anyone in the group saw the irony in burning gas to get to the anti-oil-drilling protest?

Meanwhile, the less visible work to stop Shell from using Seattle as it’s oil-rig maintenance port, and in a larger sense, to stop arctic drilling in general, continues. But the kayak protests brought the issue to a wider audience, raised awareness, showed politicians how important the issue is, and helped bring in donors to the cause. That’s hardly a waste of time.