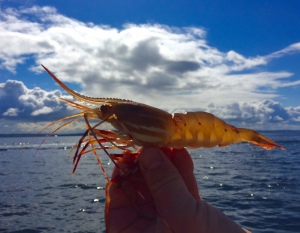 The search for the elusive, wily, Puget Sound spot prawn launched (and concluded) Saturday. With just a four-hour season this year, there would be no messing around. 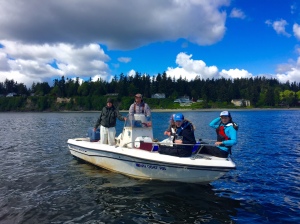 Two boats (Smarty, Helene, John and the girls on the hunt)…

One quick selfie in the brief moments before Weston returned to his customary job, napping… 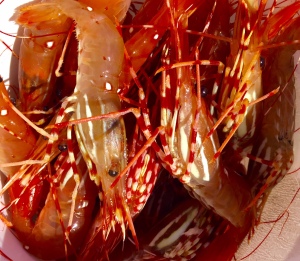 …and 640 spot prawns. Not to mention countless great meals ahead.

Back at the dock, Weston woke up just in time to haul gear. “Going shrimping,” he said, rubbing his eyes and yawing, “is really relaxing.”

As our good friend Smarty says, it just wouldn’t be a spot-prawn opener without weather. And so it was. After days and days of blue skies and sunshine, our Puget Sound shrimp season–now down to a single, partial day–arrived with rain and wind. The kids and I joined Smarty for a few quick pulls and found serious abundance, which is, I suppose, one of the benefits of such a limited season. Since he moved away for work, we miss Smarty, and it was great to be out on the water with him again.

Spot prawns spoil quickly if the heads are left on, so the kids made fast work of cleaning and counting our haul. That’s Skyla and Weston, above, twisting shrimp heads.

Since we were already running late for a dinner party at our friends, Earl and Doreen Harper’s, place in Seattle, we ran for the ferry, hauling a big container of prawn tails on ice. That’s Chef Earl, working his magic in the kitchen, under the watchful supervision of the peanut gallery, aka, Dave McCoy.

And…Voila! The best spot prawns I’ve ever eaten, by far. Earl’s secret was a fast, hot, dry saute, followed by salt, butter, garlic and parsley in a hot–and humongous–pan. Seared on the outside, coated in salty, garlic-y butter, and firm and sweet inside, they were magnificent. Of course, Earl’s other 9 courses–including Spanish blood sausage and shredded apples wrapped in nettle leaves, and marinated pork skewers with roasted tomatoes–were off the hook as well. On the long, late drive home, full, happy and tired, we felt lucky to have such great friends and days.

Our two-day, local spot prawn “season” is now in the books, but we enjoyed it while we could. Saturday, Weston had a baseball game right in the middle of the 7:00am-3:00pm opener, but we zoomed home, picked up Skyla, threw on some rain gear and joined Smarty, Neal and John for a two-boat, last-haul-of-the-day expedition in windy, choppy, rainy conditions. Rough going, but the shrimp were thick and it was good to get out on the water with friends. Weston fell asleep as soon as we left the dock and didn’t really wake up until 7:00am the next morning. Some things haven’t changed.

Today, completely different story. Sunny, bluebird sky, no wind. I was sad the kids were in school and missed out, but felt happy to restock the shrimp supply, since we’ve already gorged ourselves on Saturday’s haul. I was in meetings until noon, so I jumped in with Smarty (thanks, bud!) and we had a gorgeous afternoon on the water. Even pulled up a little by-catch, pictured above. 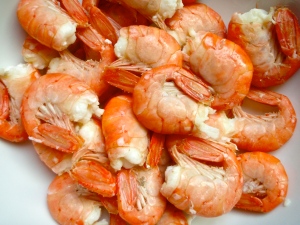 This is what it’s all about–sweet, firm, delicious spot prawns on the table. We like ’em skewered and grilled, or sauteed in olive oil, or wok-seared with black bean sauce, or poached in garlic butter over linguine…pretty much however you cook spot prawns, they’re the best shrimp you ever ate. Tonight we went simple and just boiled them in saltwater. Add a little garlic-lemon-butter dip, or horseradish cocktail sauce and I can’t stop. So good!