In the midst of what’s been a long stretch of rain, wind and more rain–seems like we’ve had a power outage about once a week since September–I was dreaming of spring. I know, it’s early. Not even winter yet, for heaven’s sake. But the rivers were blown, the Sound a sea of whitecaps, and my office an icebox. In other words…yuck.

So I dug around in the freezer and came up with a big chunk of Columbia River spring Chinook, the greatest eating fish in the world, and at least to us, the true symbol of spring in the Northwest. And thanks to the miracle of modern vac-sealing technology, it looked pretty good. Almost eight months in the freezer, but my mouth started watering just thinking about the possibilities.

Thawed it, salted it, scraped the skin to remove moisture (Skyla scaled it before freezing back in April) and threw it on the grill. The fish had lost a bit of its usual deep-red coloring, but otherwise, it was all the there: dripping fat, crispy-on-the-outside-melting-on-the-inside texture and savory, crunchy skin. Exactly what we needed!

Meanwhile, Back On The Columbia…

I was so far behind in work and chores from fishing all the time…I decided to go fishing. And when it comes to Columbia River spring Chinook (the highest fat-content salmon in the world) and an opportunity to hang out with my good buddy Smarty, well, there wasn’t really much of a decision. Had to go. And springtime on the Columbia means all kinds of weather, countless shades of green on the hills, and this year…fantastic fishing. 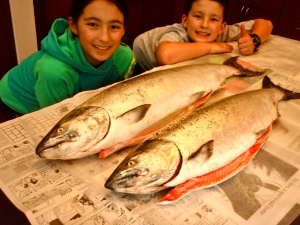 I love springers. The kids love springers. In fact, I don’t know if there’s anything else we’d rather eat. Here are a couple of nice ones ready to be butchered. We’ll scale, fillet, steak and vac seal quite a bit for the freezer, then get ready for the night’s dinner: Springer shioyaki, salted then grilled over a hot flame. Our mouths are already watering here. Probably my favorite meal of the year.

This is Skyla going to town as our head scaler, using a serrated knife to scrape the scales free. It’s more work, but completely worth it–the skin crisps up in all that springer fat and tastes delicious. I’m already dreaming of all the springer dinners we’re going to have in the coming months. Thanks, Smarty. Great times, great friends and great food.

After all the talking and writing and thinking about eating Columbia River spring Chinook, I can honestly say: It does NOT disappoint! Holy smokes. I truly cannot think of anything I would rather eat, especially salted and grilled over a hot flame, shioyaki style. The picture above is how it starts–the fillet has been relieved of its pin bones, scaled, cut into 1.5-inch thick steaks and liberally salted. I like to sprinkle the fish with about twice as much sea salt as I’d use if I was going to eat it right away, then refrigerate skin-side up for six to 24 hours. The longer it’s going to be before cooking, the more salt I use. The salt will initially suck moisture out of the fish, then the miracle of osmosis takes hold and it draws the moisture back in, sealing the cell walls behind it.

When it comes out of the fridge, I use a sharp knife like a squeegee on the skin to remove moisture and ensure max crispiness. Then it’s a quick trip to the barbecue, with the grill pre-heated to around 500-550 degrees. 2.5 minutes on both sides and an additional 1.5 minutes with skin facing the flame for a total 6.5 minute cook time. You have to be careful, though, because so much fat drips out of the steaks that flames can engulf the fish. Not to mention your hand. 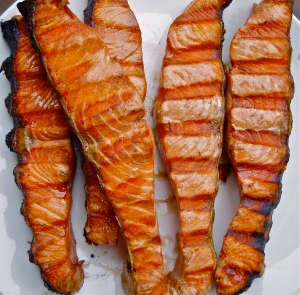 And…here it is, fresh off the grill. YES! The most amazing part about springer is that it’s not just the skin that crisps–the flesh itself sizzles in it’s own fat to create a crisp, caramelized shell. Or wait, maybe the most amazing part is that the inside is so tender and fatty that it literally melts in the mouth. And that’s not just a cliche. I mean it really, truly melts away as you chew. Or wait, the most amazing part is the single-bite combination of crispy, melting, savory textures and flavors all melding together. Yeah, that’s it. We ate this batch with sweet/tart cucumber sunomono to balance the fattiness of the fish, steamed broccoli and mix of Japanese white and Lundberg brown and wild rice. Best meal on the planet!