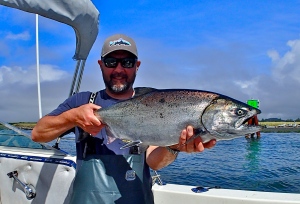 Just home from what has become one of my favorite annual traditions–a late-summer grocery run to the southwest Washington coast with my good buddy Sweeney. This year it was especially pressing for me, as our local king season was cancelled and our freezer was running low. As you can see above, it was a success. 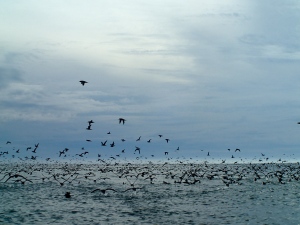 We fished with a big front moving in from the Pacific; the barometer dropping like a rock. This lowered expectations for fish, made for a gorgeous sky, and brought thousands of shearwaters–I mean a black line of birds from horizon to horizon–in to greet us. I think I took and posted almost the exact same photo last year, but the sight of these birds and their vast numbers never ceases to blow me away. 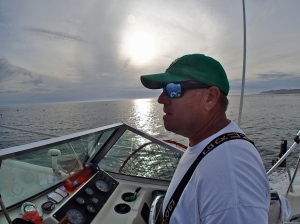 Mostly, though, I look forward to this trip for the time to hang out, fish, shoot the breeze and go on crazed, late-night searches for food in the middle of nowhere with Sweeney. That’s him looking nautical as he scouts the tide rips ahead. 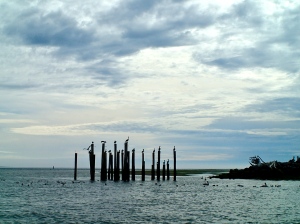 Fishing wasn’t easy, but thankfully, with two days of getting after it, we managed to scrape up a nice box full of kings and a bonus silver as well. The weather felt strange after months and months of bluebird skies, but it was good to be out in it, in a beautiful place. Thanks for making the time, Sweeney. Much appreciated. 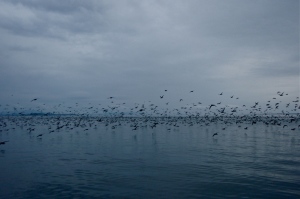 Just before dark, a black line appeared on the western horizon, stretching from north to south as far as we could see. We kept fishing–this was my last day of king fishing for the year–and I was focused on trying to get one more fish. “What is that?” Sweeney said. I looked up, and the line was clearly closer now, and less defined, a kind of blurry streak where the water met the sky. The line drew closer, slowly at first, but gaining speed. A boat fishing a half mile west of us suddenly disappeared in the black haze. We pulled our gear in and ran to check it out.

As we headed west, the line kept coming east to meet us. Now we could see what it was: birds. More birds than either Sweeney or I have ever seen, flying in a tight, swarming flock that stretched for miles. Then, on some invisible cue, the birds started setting down in the water around us; sooty shearwaters, the great circumnavigators of the Pacific. Shearwaters fly thousands of miles every year, from their nesting grounds in New Zealand, up the Western edge of the Pacific along the Asian coast, across the Aleutians, and now, down our coast, headed back to the Southern Hemisphere. But so many of them! We wondered if it was the raging gale we’d fished in the day before that drove them here in such numbers, or the anchovies filling the bay, or some mysterious force we couldn’t fathom.

August is coming to a close. Summer kings, at least for me, are over for another year. What a way to finish–two days of fantastic fishing with a great friend, an ice chest full of fish, and this crazy spectacle of birds. Time to head home, fire up the smoker and start getting ready for the more structured life of autumn.  Time for kids going back to school, soccer practice, swimming lessons, homework. Time for me to actually get back to work on my book. The Farmer’s Almanac called for a cool, wet August and early fall this year. So far, the forecast looks right. On the drive home, rain came down in sheets. My first thought was not yet, it’s too early. Then I started thinking about big ocean cohos coming into the Sound, and chanterelles pushing up from the forest floor. It could be awhile before I get back to that book. 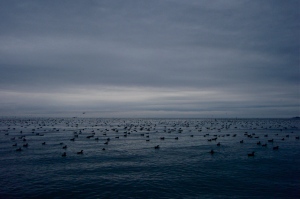