Closer To The Ground Video

As part of the re-launch for the second edition, Patagonia Books commissioned this little “book trailer.” I’m not really sure what that means or how it works, but I think the idea is that the video helps sell books. In which case, as weird as it is seeing and hearing myself onscreen, I’m all for it. And the kids and I had a fun time with the shoot.

Huge thanks to the good folks at Vignette Creative for doing such a beautiful job.

I will probably post this again when we’re closer to the release date of the paperback, but thought I’d put up an early peek now. Hope you like it. 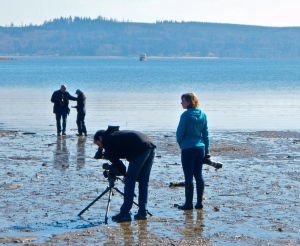 The film crew wanted to shoot some oyster-picking footage, but the only time everyone’s schedules coincided, we had issues: Marginal tide, blazing sun (which I’ve been told is the absolute worst for shooting), etc.

But sometimes you just get lucky. The tide turned out to be low enough to expose the shellfish beds, and miraculously, as the entire state basked under glaring sun, there was a small pocket of gorgeous fog hanging over the exact spot where we were shooting. We hit the beach with four cameras, all kinds of microphones, and a pile of equipment I couldn’t even begin to identify. The kids and I learned a ton about filmmaking (it does bear some resemblance to sausage making…the finished product is–hopefully–a lot prettier than the process), and bagged three limits of oysters to boot.

We shot some cooking scenes at home and ended up with enough crispy, fresh oysters to feed the whole crew. The process was exhausting for me, but the kids held up great, and we all enjoyed the process. When Vignette is done working their magic, I think the resulting “sausage” will be awesome.

Spent the afternoon with the crew from Vignette Creative right here in the backyard, and they turned the woodshed into what looked like a Cecil B. DeMille production. I thought it was going to be a simple little interview, but these guys are serious: Lighting, sound, four cameras, full team…quite a production. It was a bit daunting, but hopefully they got what they needed.

Can’t say yet what they’re working on, but it’s related to Closer to the Ground, and I think it’s going to be pretty cool. Will let you know as soon as possible.

If it’s true what they say about a camera adding 15 pounds, I’m going to look 60 pounds heavier!