Okay, here we go with the fish pix. As guests of our friend Will (who also kindly took  these photos), and the Heiltsuk First Nation, Yvon and I knew there was some self-imposed pressure on our hosts. No matter how much we told them we were just happy to be there to experience the place (and we were), I think anyone who invites fishermen to their home waters wants to show them how good it can be. We were more than happy to oblige, and fortunately, the steelhead were as well. That’s Yvon taking some pressure off Will by putting the pressure on our first fish.

The fish we found were mostly in pools that don’t even exist on a high tide. Instead of long, meandering, silt-bottomed tidal pools, these rivers are filled with great structure and big rocks in tidewater. When the tide recedes, the pools reveal themselves, along with some very aggressive fish. Not a lot, but enough to reload the good water, and with nobody else fishing, we were able to take full advantage. 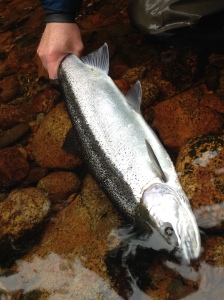 Another interesting discovery is that the fish, from chrome bright to slightly colored, were all coming in on the tides. I think this is a factor of how little time coastal spring fish can spend in freshwater–some of them are ready to roll the minute they come in. Every fish pictured here had sea lice, regardless of color or maturity. Above: Chrome!

While Yvon was old-schooling ’em with floating line and tiny comet (at one point, as the tide filled a pool and the current quit, he went full Bill Schaadt with a shooting head and slow-strip retrieve to hook a fish after I’d quit), I followed up swinging a bit of a sinktip and joined the fun. 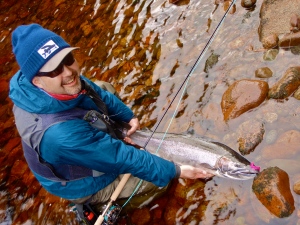 Here’s another one of Yvon’s floating-line fish, below. A nice hen showing some color but it had just come in on the tide about a half an hour earlier.

This big buck, below, has to be one of the most beautiful steelhead I’ve ever seen. Absolutely pristine, with thick shoulders and gorgeous colors. Must have been four-inches across the back, too.

And then, we were back to work, hoping the tide had brought in more shiny presents. Awesome. Stay tuned for more from the BC Coast… 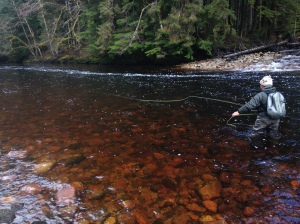 Just home from a little visit to the remote central coast of British Columbia with my good buddy, Yvon. And when I say remote, I mean a 35-mile open-water boat ride in a 17-foot skiff from “town,” and a near-complete lack of infrastructure. But that’s pretty much what it takes these days to chase steelhead in places where you don’t see any other anglers. That’s Yvon and our host, Will, checking out the solitude in front of camp.

Lack of infrastructure means it takes a little effort to even get to the fishing. From camp, we had an hour run to the mouth of the river, then hauled personal rafts up to the put in. Then we dragged the boats down a little tributary to the main water, and due to lack of rain, dragged them many more times throughout the day. Above, Will and Yvon look for enough water to float. 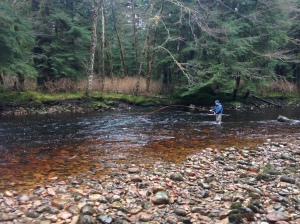 But the river itself–and the surroundings–are spectacular. Tannin-stained water, old-growth spruce and cedar forest, large, unsilted cobble everywhere. We worked our way downstream, stopping to fish every bit of swingable water. The lower we floated, the better it got…and better yet, not another angler in sight. In fact, some of these runs probably haven’t been fished in years, if ever. Below, Yvon goes old school with a floating line and comet. 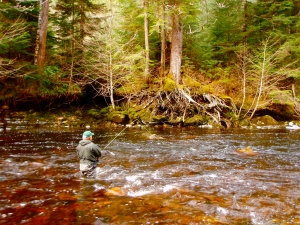 Finally, as we neared the mouth, the tide ran out, revealing a series of perfect pools. And the tide had brought us some gifts. To be continued…