It’s not easy to leave Puget Sound in summer, especially during king salmon season, but Montana–and our friends Craig, Jackie, Finn, Dozer, Gizmo and Bee The Cat–were calling. So the kids and I traded industrial-strength downriggers and gear rods for five-weights and waders, and headed east for what turned out to be one of the best trips of our lives so far. After a couple days on the road, we had a welcome home-cooked feast of thick, juicy elk burgers at Craig and Jackie’s, then headed to the river. That’s the kids and Craig soaking up that gorgeous Montana light, waiting for the post-dinner hatch to come on.

With Craig’s expert tutelage, Skyla struck first with a gorgeous, bright rainbow that jumped five times and nearly ran out of the pool. Weston hooked a big fish at dark that did run out of the pool and under a logjam, jumping all the way. It finally broke off, and Weston, probably for the first time, felt that gut punch of a good fish getting away.

In the days that followed, we wet-waded meadow streams, hiked up boulder-filled canyons, and fished the Madison in the evenings, finding healthy, fat, drag-pulling, wild fish everywhere we went. That’s Skyla, below, with one of eight selectively feeding rainbows the kids landed one night on pink lady spinners. (Photo by Craig Mathews)

And the incredible meals from Craig and Jackie’s kitchen! I think the antelope steaks took top prize, although the ruffed-grouse-jalapeno sandwiches were right there, too, as were the elk burgers. We actually looked forward to dinners–the food, the friends, the dogs and cat–as much as the fishing. Huge thank you to Craig and Jackie for making our visit so special, and for all their conservation work that’s kept this part of the world the incredible place that it is. 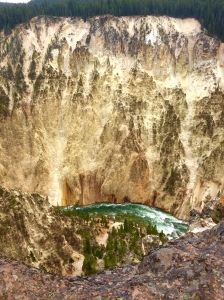 One day we left the rods behind and drove through Yellowstone as pure tourists. Skyla chose the Grand Canyon of the Yellowstone and Yellowstone Falls as something she wanted to see. They did not disappoint, although the hike back up to the car nearly killed me. About 3/4 of the way back up the trail, huffing, puffing and sweating, I had to take an old-guy break while the kids sprinted, yes, sprinted, past me to the top. Humbling. My cell-phone pix don’t do it justice–if you’re ever in The Park, go check out the canyon and falls. Breathtaking…in more ways than one.

Both kids fished well, even going to some single-handed Spey casting along brushy banks. Their dad about burst with pride. Watching neon-colored grayling rise up through five feet of air-clear water to eat a dry fly was a highlight. 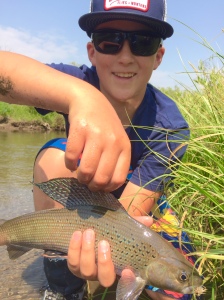 As were chrome rainbows taking soft-hackle flies (sent to us by our friend Yvon specifically for this place) in a 30-knot headwind down in Idaho.

And yes, Weston found redemption for the big one he lost the first night. 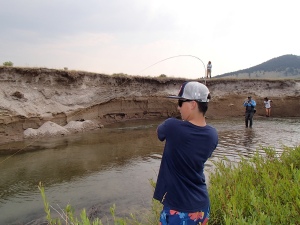 That’s him putting the wood to something big, above, with paparazzi in tow. (Photo by Craig Mathews) And finally, after an epic battle, lifting Troutzilla for a quick picture. When he released it, he stood there with a funny look on his face. “Dad,” he said, “there’s something wrong with my hands.” He extended them for me to see–they were shaking from adrenaline. Welcome to Montana, Buddy!

One day we fished a medium-sized river flowing through potato and wheat fields. Once Yvon had Skyla rolling on her own with the tenkara rod (no reel), he helped Weston wade into position to try the same techniques with a regular fly rod. Soft-hackle wet fly, downstream swing, small twitches along the way and…FISH ON! I think each kid must have landed at least 20 fish in an hour, with lots of laughter, high fives and huge smiles.

Another day we hiked around in The Park, searching for high-elevation brookies between waterfalls and in creeks meandering through glowing meadows. 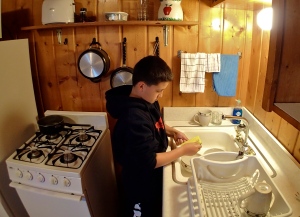 Once we found our rhythm, we started each day the same, with Weston washing the breakfast dishes and Skyla packing our lunch while I loaded gear into the car for our next adventure. 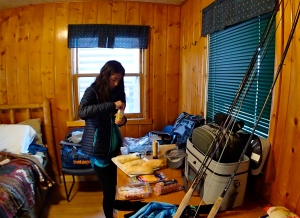 But wherever we went, we ended each day back “home” on the Madison. Skyla, below, showing off her new tenkara skills. After yet another fantastic dinner at Craig and Jackie’s, we’d wader up and hit the 50-mile riffle ’til dark. That’s a rhythm I could really get used to.